Back in the 20th century, I did a lot of cooking. A lot of it was because it was my job, but I also spent a lot of time cooking for myself. However, since then, I met and married Emily, and we have developed a routine that smacks of a traditional marriage. And by that I mean she cooks every night. But I am still a 21st century, sensitive new-age guy. So part of our arrangement is I always do the dishes.

This works out really well because Emily and I both agree she is a great cook, I tend to cook only things with meat, Emily hates doing the dishes and somehow is very bad cleaning them, and when I cook we sometimes end up eating at 9 p.m. But with Emily cooking our meals are more punctual, healthier, more varied, and lighter than if I was cooking.

But, I was inspired by Thirty Day Challenges taking place at The Deets' household in the Lake-8 Neighborhood of Minneapolis. So I am trying it out myself. I have challenges for January through April figured out, and will post them along with May and June, a la Deets, once I get May and June figured out.

But January's challenge has been to cook a Sunday meal, a huge dish that will have tons of leftovers. I failed to do this last Sunday, but did it today.

So today I made this pork chile verde recipe. I doubled the recipe. 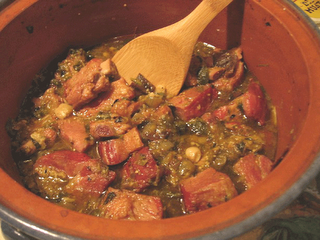 I was skeptical of how it would turn out while the witch's brew simmered. But I remembered to give the food our usual blessing ("Hope it doesn't suck."). And the dish ended up being exactly as I hoped. The meat was tender, the sauce spicy, but not so spicy it drowned out the tangy goodness of the tomatillos. As an aside, only once have I neglected to bless a dish I have made with "Hope it doesn't suck." And, Emily will back me up here, this was the one time something I made really sucked.

But I digress. I think Emily liked the chile I made Sunday, just not as much as I did. But as you may predict, she found it a bit too meaty and greasy. What a pansy-ass Minnesotan she is. I'm joking of course.

And the best part for me is, tonight Emily has to clean up the kitchen and wash the dishes.
Posted by Rocco at 9:39 PM

Rocco
Minneapolis, Minnesota, United States
I have now lived in Minnesota for over ten years. I am considering changing my name to Lars.